Here´s a recap of last years Vert Attack and it´s already time to save the date (April 11-13th 2019)  and book your rooms, flights, train tickets for this years Attack. We´re already looking forward to another rad one. Don´t miss it!!!

My very first time at europe’s most popular vert contest.
Thursday, 22nd of March. After an early bird start at 7:02 am at the outlying suburbs of Hamburg-City our small group of three arrives at Bryggeriet’s. When I enter the massive, former factory-style brick building, I immediately feel immersed in the very world of Skateboarding – at least of vert skateboarding. First thing I see is a small kid speedin’ up and down the wallride next to the entrance, headin’ for a street spot kind of quarter besides the counter. I get in as ‘press’, a first timer for me and my debut in this regard …
Two footsteps further we meet one of the countless friends my travelmates seem to have up here in Malmö. After all, most of them just came here for the event, which is actually the twelfth Issue of VERT ATTACK. I feel like I have stumbled into a big family feast by accident…
So I sit down somewhere between bags full of protective gear and – as turned out later – some pro Riders. Time to examine the surroundings: This year’s motto is Hockey. In fact, I don’t know much about Hockey, but I guess the fancy horn sound right next to me must be a spawn of that. The halfpipe is painted like a hockey field and equipped with a lookalike goalie as extension, displaying a nervous keeper ­- large emblems in this year’s red and blue design all around. We arrive just in time for the girl practice and I am so amped seeing these girls shred and simply having a good time: It doesn’t seem much like a competitive situation. Followed by veteran (50+) and master (40+)qualification, already mirroring incredible style and grace amongst the riders. By now it is time to mention that Bailgun Magazine’s editor himself made it to the veteran’s finals ; ) Best looks of the day: Wolfgangster in his yellow DC combat shoes.

Arianna Carmona – ollie to lip over the channel 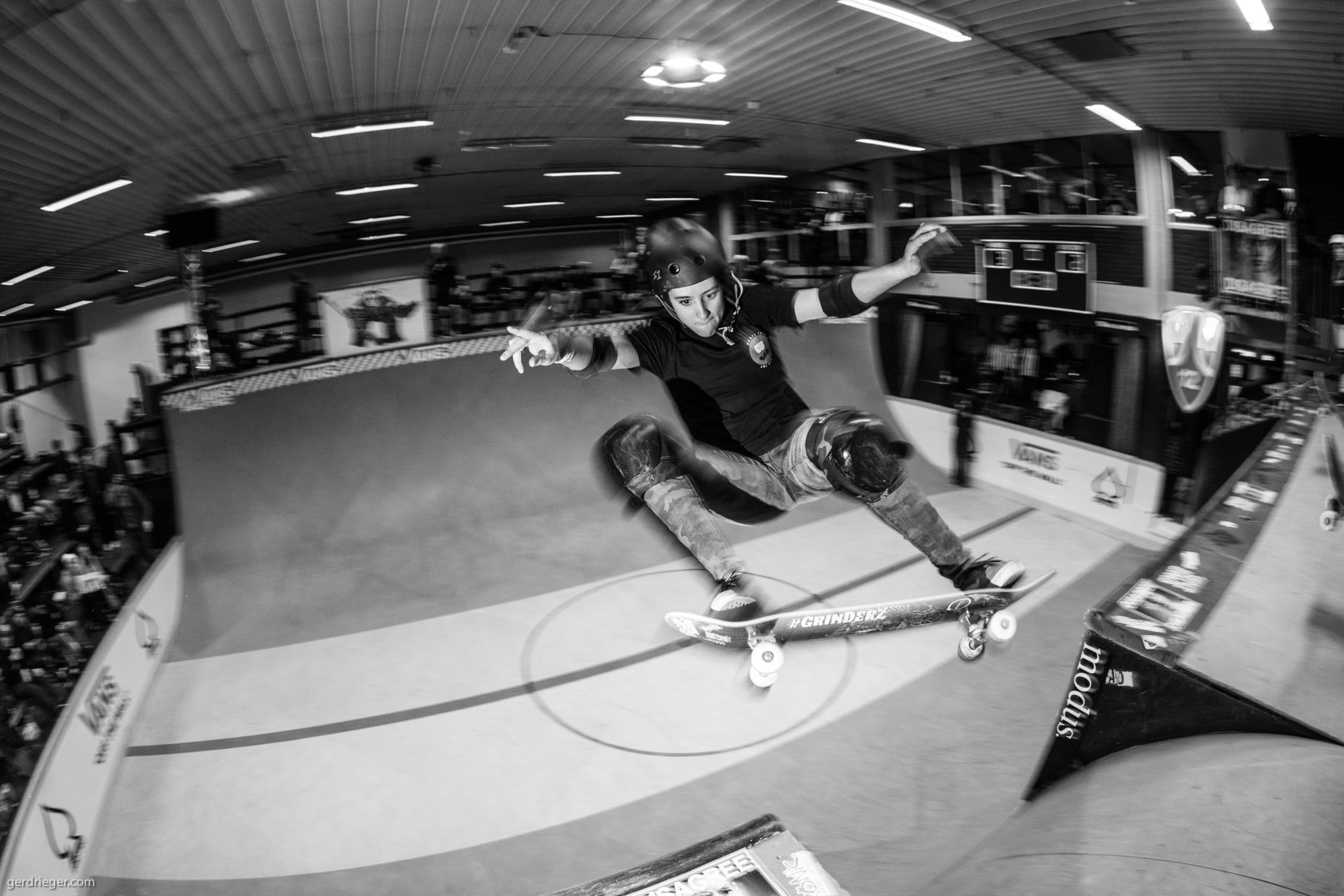 All this sitting and watching makes me want to leave the spectator’s perspective, so after the live concert and some of the Pro ‘warm up session’ – way beyond anything I would consider as my personal ‘warm up’ – I decide to go get my board. [Everybody seems to be watching the Pro Practice, so I might sneak away unseen.] So I head for a beautiful blueish bowl right next to the halfpipe. Accompanied by a small blonde girl – who happens to be the sister of german olympic team member Tyler Edtmeyer – I take a few turns. But soon some of the Pro Riders get tired of showing what they got and leave the halfpipe for my sweet and calm discovery. I move on to the lower adjacent flow bowl where I hit my knee and decide it is enough for today. Also I have accepted the driver’s role for my companions who happily fell in love with the exclusive Vert Ale. By the way, if you’re looking for an excellent brewery, check out Svaneke brewery – from our dear friend Jan Paul. ; ) Good Night for now.

Nicole Hause – blasting frontside airs among some other rad stuff like, invert fakies, alley oop indys, half cabs and more. 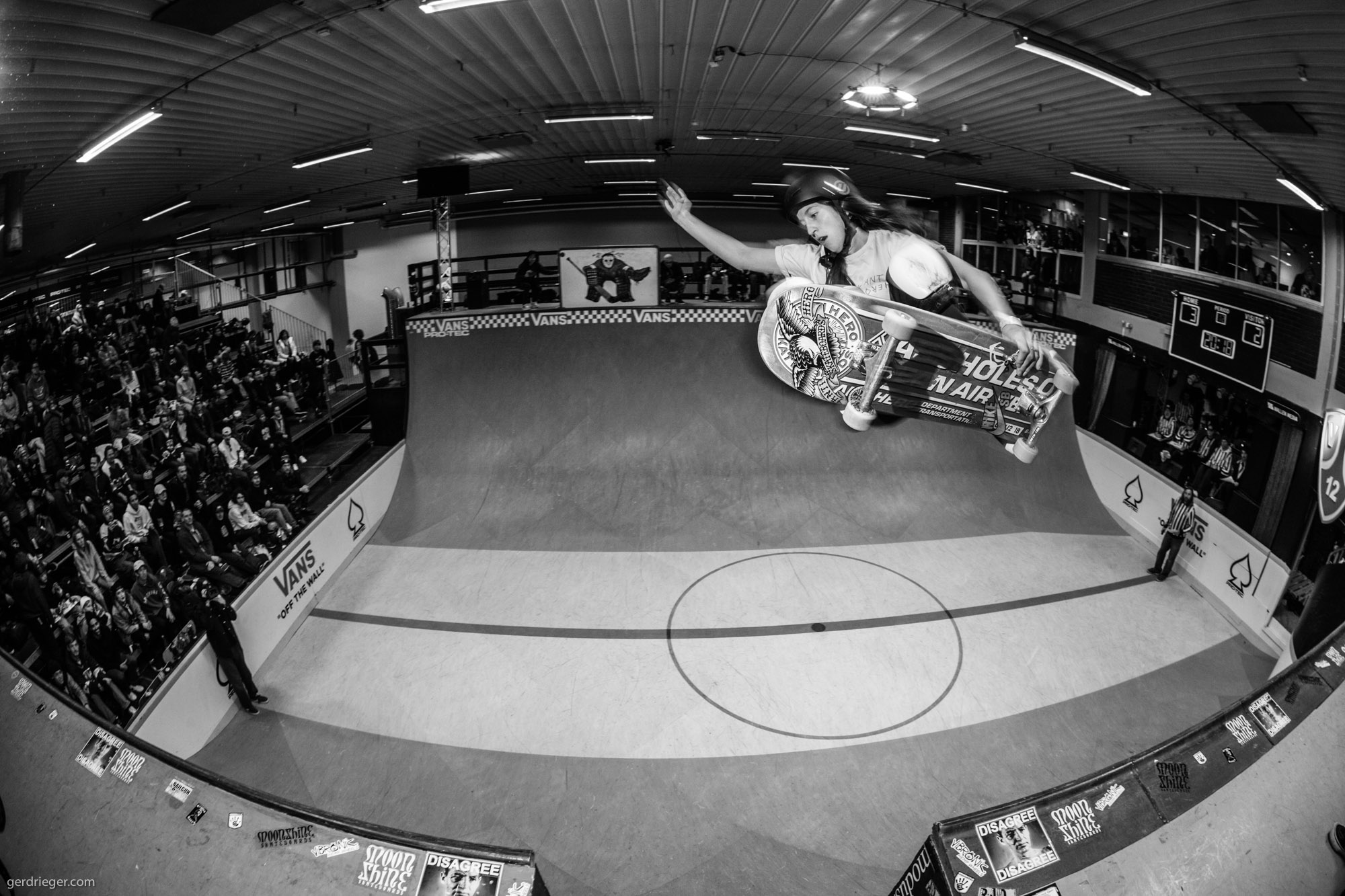 Friday, qualification day. Supposed to be even more interesting than yesterday! Again, the place is crammed full with kids of all sizes, skating wherever there is a gap between visitors, riders and bleachers. As Bryggeriet is known as the world’s first and single skateboard gymnasium, I wonder if they ever have any regular school lesson these days…
For the girl qualification I move to the platform to do some filming and I feel so giddy seeing them fly by from up here. It looks so much fun I immediately feel the need to join them – except the unimportant fact I never ever have tried skating a fullsize halfpipe.
After the short glimpse of pro practice the day before I thought I’ve seen it all – but today tops my expectations. Everyone keeps saying it will get much more intense tomorrow… By the end of the day I have really fallen in love with Stan and Sean Goff, who comment every move with competence and great humor. Rad to see real eloquence ‘at work’.
Eventually everyone steps outside for a smoke – and that’s when I meet Silvia Rula. With silvery hair and 26 years of being a female skater I am so inspired by her and her gnarly alley oop 50/50’s.

Finally it has become Saturday and I feel a little exhausted – by sitting all day and watching other people do the part that really makes you sweat.
[While I am writing this, my boyfriend just discovers this video: ‘Auby’s World Part’, a street part – and it is one of those strange incidents because it was also Auby Taylor I saw that day at the Pro Semis, just missing the finals by one spot…]
Rewind to the beginning of the day. 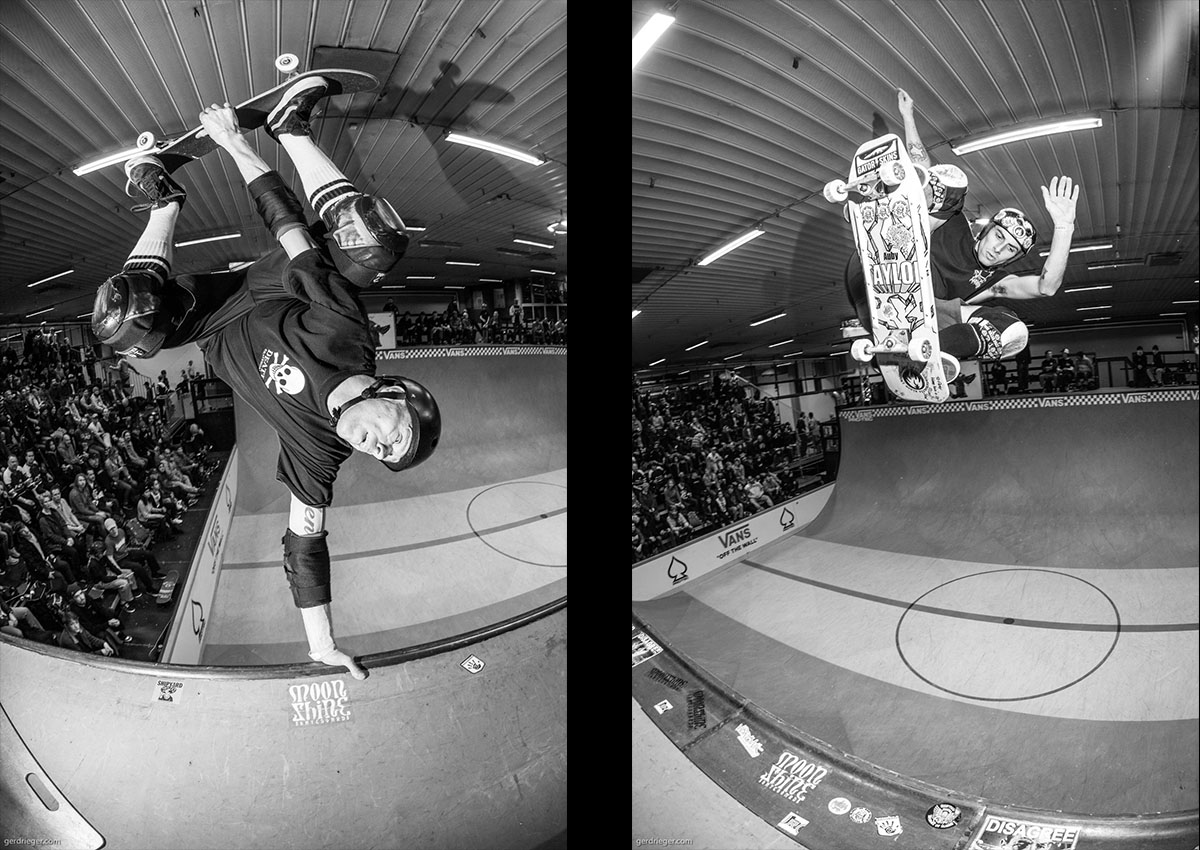 We check out Vans Park in the morning but it is bone-chilling cold so we don’t feel like really trying to skate. Hurrying back, we arrive mid-session of the junior finals. And what awesome kids! I am so impressed by their skill level. Especially Roman Pabich and Luigi Cini are my favorites in style but there are also three super tiny boys who really have the crowd at their feet. Brazilian kid Guilherme Khury even lands a 900! 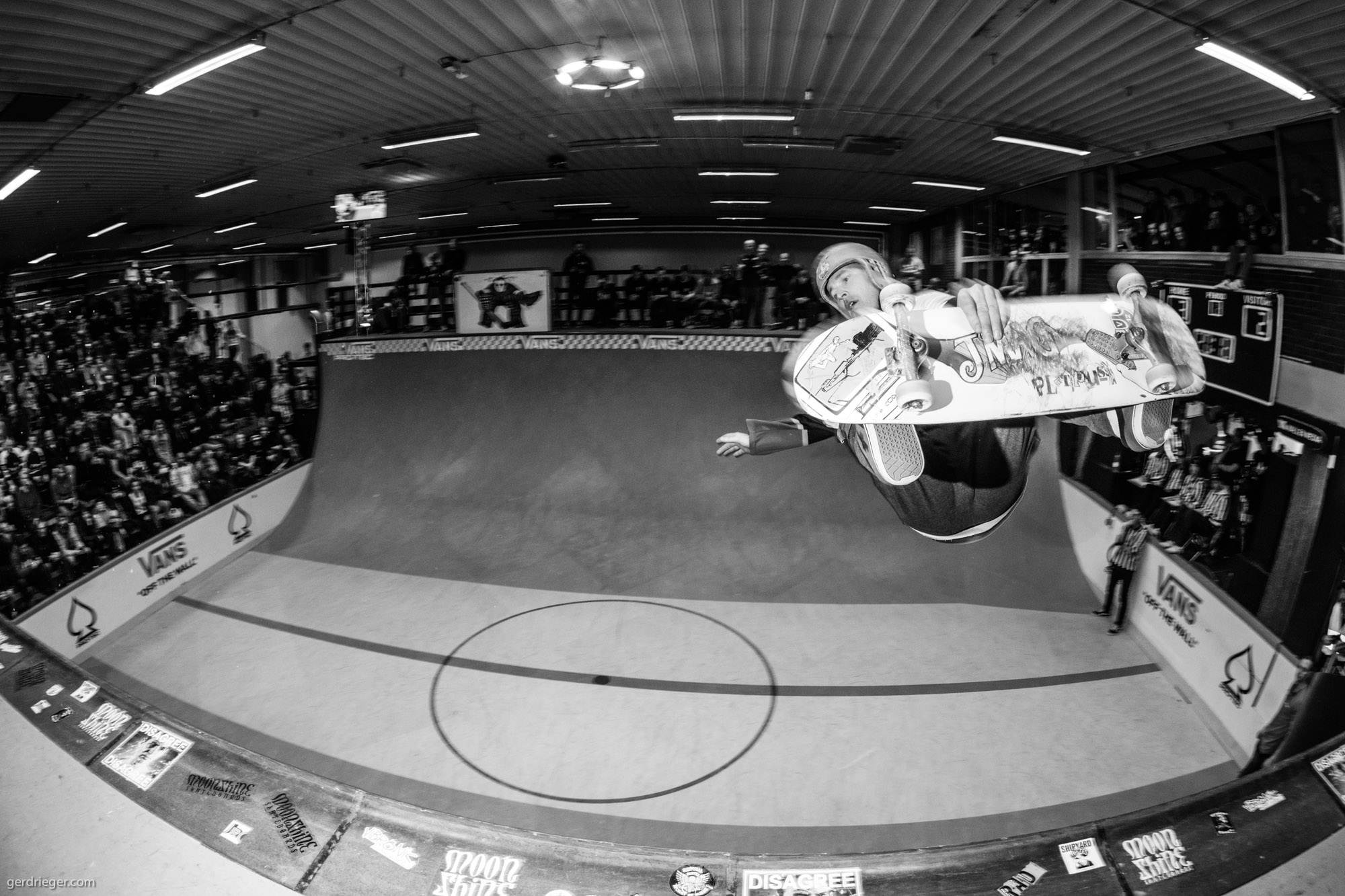 My highlight of the master’s finals: Andy Macdonald aka ’Vert Jock’ – as his jersey says – gets tackled by the other guys after he puts together an amazing run that saves him the first place of the masters (40+). This act of valor brings the feeling of real ice hockey, but maybe someone just mixed something up here… defeated in third place – but not on the field: Jocke Olsson. Followed by another crowd’s favorite: John Magnusson.
During the finals all of the girls deliver a great show and I am so stoked! They have some balls ; ) Little Lilly Stoephasius from Berlin spinns herself to a new sponsorship and flying Arianna Carmona, literally flying, even reaches the goalie for a wallie to air. Not to talk about Nicole Hause, who finishes almost every run and does all of her tricks beautifully clean and stunningly high up in the air… .But most of all I love the spirit amongst the girls as they cheer each other with every single try. Makes me wanna go skate straight away when I am back home! 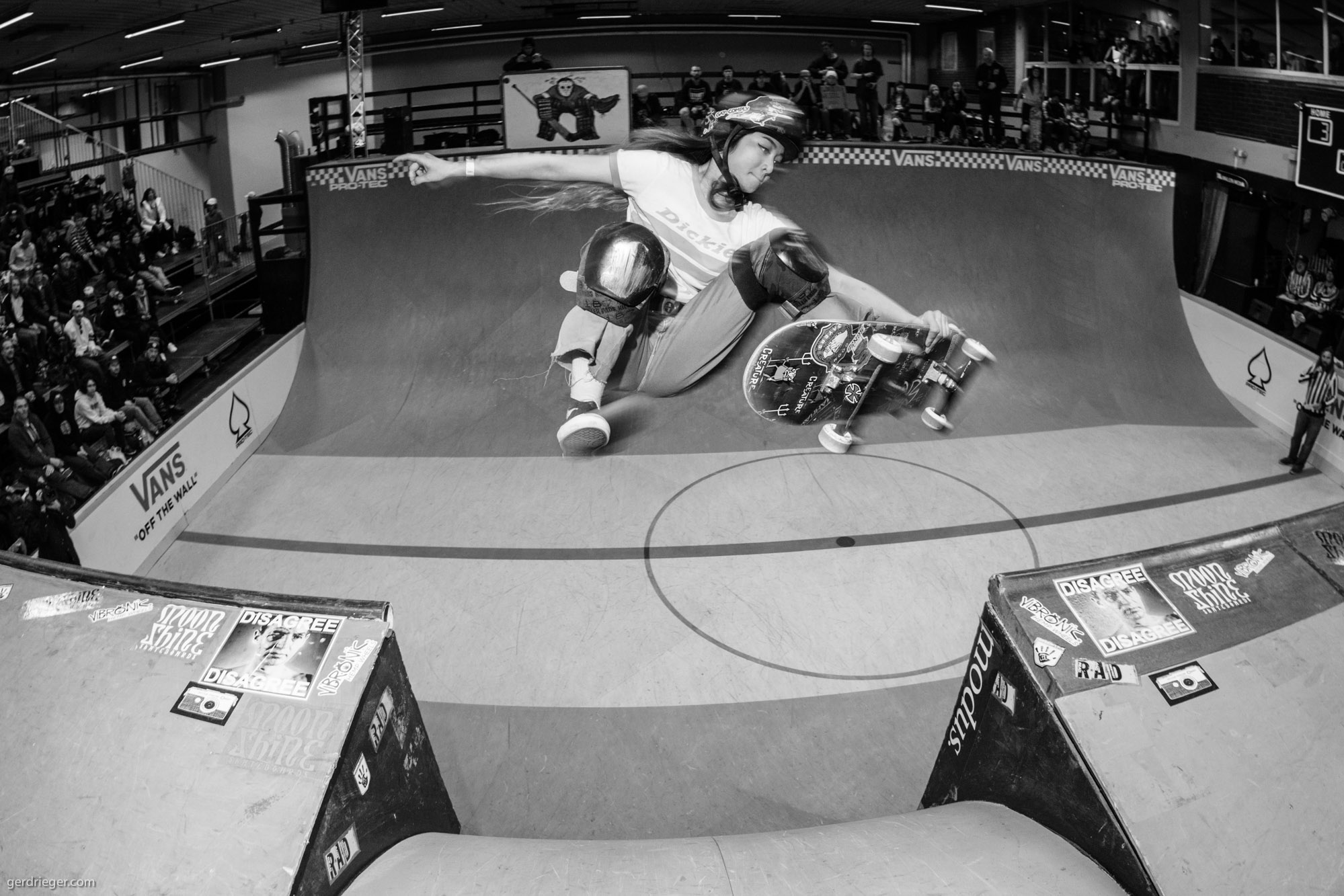 Pro Finals – an intense and extraordinary show… so many tricks are far beyond my imagination – and the crowd seems to explode every single time a trick is landed with unswerving grace and lightfootedness. Even a bail can be done beautifully – as seen by Clay Kreiner who seems to fall smoothly on his feet like a cat each of the few tricks he misses. In the course of the day every try seems to get more intense, every run more insane as every rider pushes himself to the limit – and even further the next time…. So many impressions: The banging of truck on cope, the cheering crowd and over and over the weird noise of those ice hockey hooters. And the phenomenon, always amidst the riders: The naked photographer (obviously he has earned this nickname with quite some effort). 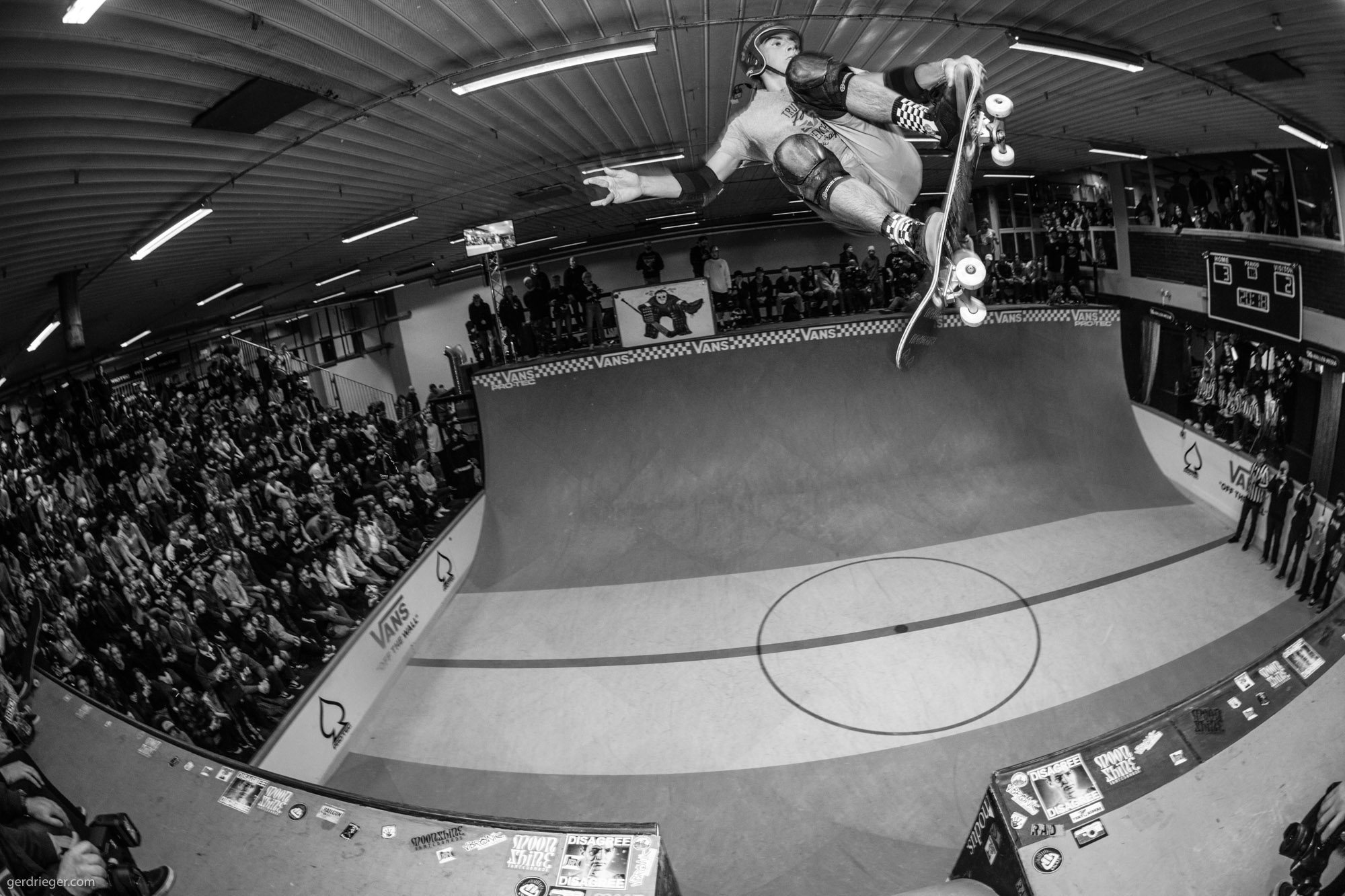 I see a lot of really beautiful, seemingly endless airtime these days! Alley Oop Airs by Shea Donavan, the angry style of Alberto “Heto from the Guetto”, Liam Pace flying high and spinning like crazy…And then ‘Frenchy’ who really reminds of a french surfer boy with this wide smile on his face after his run. Sandro Diaz doing a Crist Air, Sam Backet looking so calm but smashing some rad … and Bucky Lasek performing the whole range with such professionalism – the finals leave me shouting, vibrant with energy and finally – out of words. 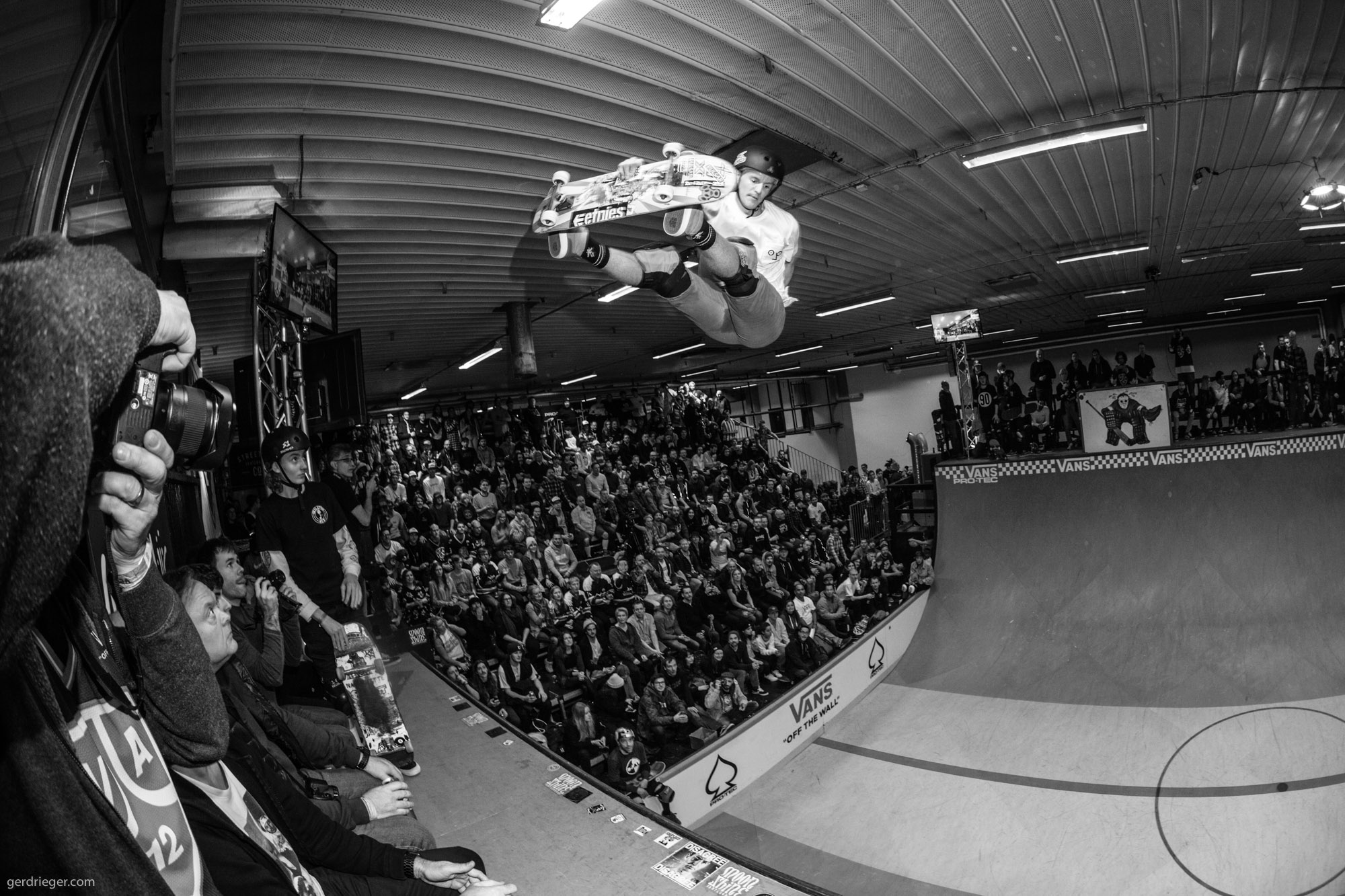 Parting shot: The Future, Toby Ryan reaches over the cannel on a frontside handplant. 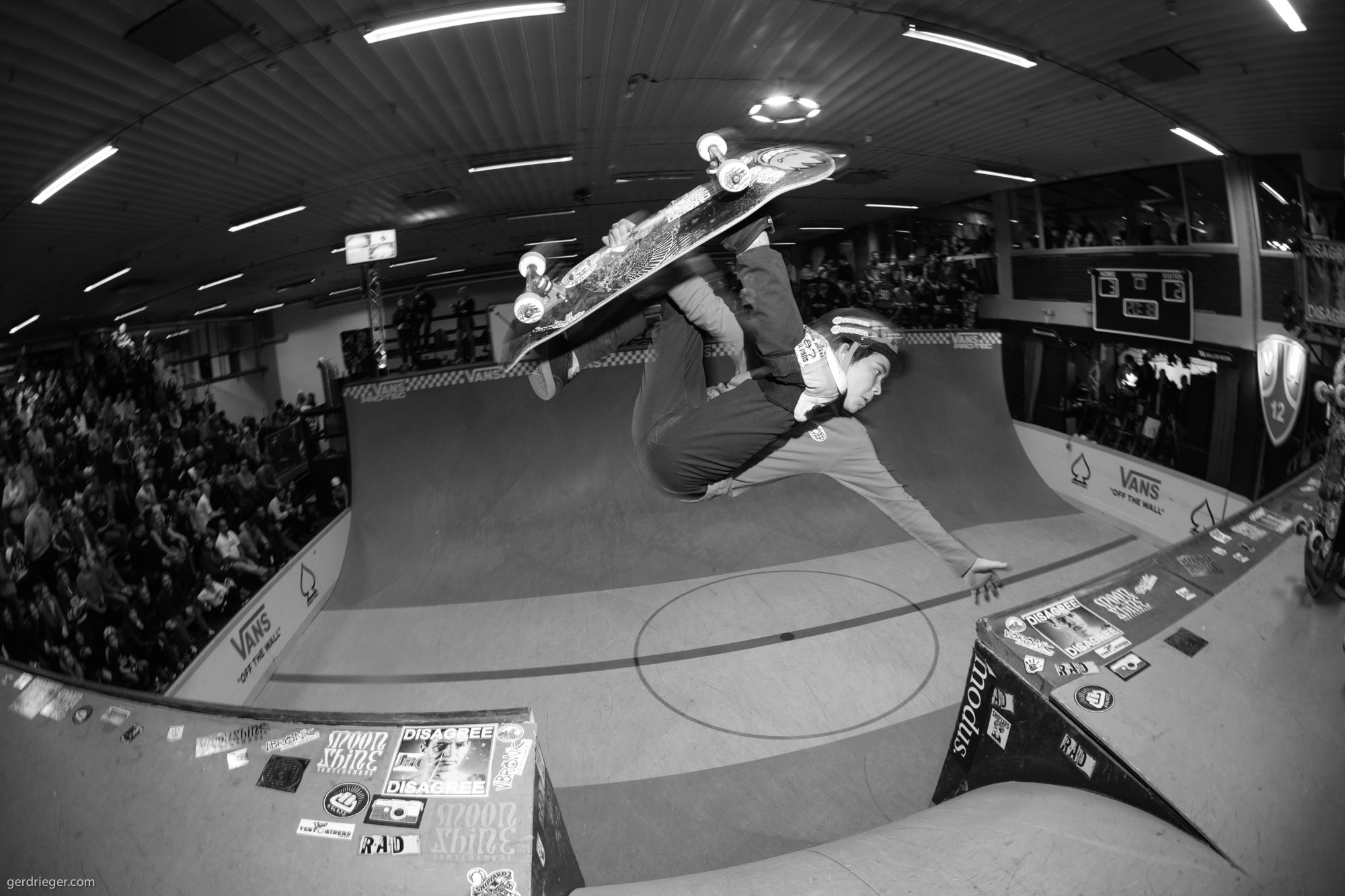